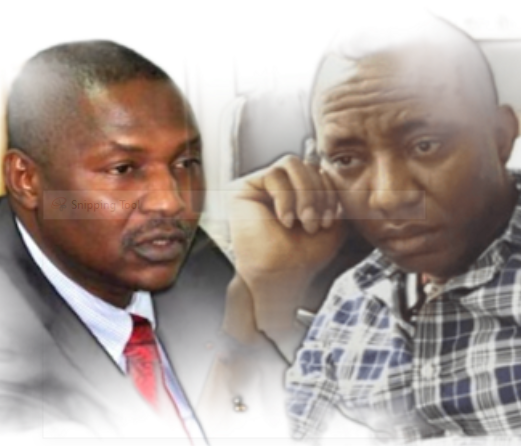 Attorney-General of the Federation and Minister of Justice, Abubakar Malami said he was never summoned by the Federal High Court over the continued detention of Omoyele Sowore.

According to Malami in a statement issued by his Special Assistant on Media and Publicity, Umar Jibrilu Gwandu, on Wednesday night,  “the issues that surrounded the subject matter borders on the application filed by Sowore’s lawyer on the 15th day of November 2019.

“The Court adjourned the matter to the 23rd day of January, 2020 for the hearing of the substantive matter.

“Surprisingly, on Tuesday the 17th day of December, 2019, the Applicant’s Counsel adopted an ex-parte application filed on the 15th day of November, 2019 before Hon. Justice I E. Ekwo.

“However, the Court, being aware of the fact that parties have joined issues, ordered that the Deputy Chief Registrar (Litigation) shall inform the 1st & 2nd Respondents of the case and the next adjourned date.”

According to him, court order in question was only to bring to the notice of the Attorney-General and Minister of Justice Abubakar Malami and the Director General of the State Security Service to take notice that upon the motion ex-parte filed on November 15th that applicants want an expedited hearing of the matter.

Quoting the order obtained from the court, Malami said: “an order is hereby made that the Deputy Chief Registrar (Litigation) of this Court shall bring this case and the next date of hearing to the notice and attention of the 1st and 2nd Defendants”.

READ ALSO : From February 2020, Nigerian citizens will pay €80 instead of €60 when applying for a Schengen Visa

Buttressing the fact that the timing for hearing falls during the holiday season the court said “an order is hereby made remitting this file to the Hon. Chief Judge for assignment of this case to Vacation Judge for hearing as the next date of hearing falls within the vacation period”.

The Court also ordered that the case file be remitted to the Hon. Chief Judge for assignment to the vacation Judge for hearing as the next adjourned date of hearing falls within the vacation period.

ALSO READ : #ImpeachmentDay: Here’s how Americans are reacting to the Impeachment proceeding against President Trump

It is noteworthy that the day or date of the next adjourned date was not indicated in the order of the Court. Therefore, flowing from the above and the Order from the Court dated Tuesday, the 17th day of December 2019 there were no evidence to show that the Director DSS and the Attorney-General of the Federation have been summoned by the Court as some individuals want to allude.