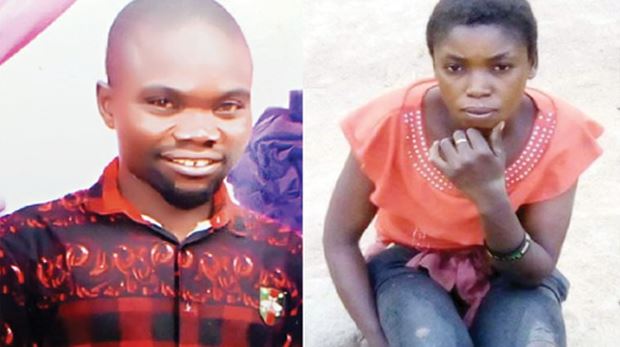 The deceased and Joy

Mrs Joy is the wife of Awarga Aondover, a mechanic who was allegedly murdered along with his cousin and dumped in a well by gunmen suspected to be soldiers in the Wukari Local Government of Taraba State. She tells JUSTIN TYOPUUSU how her husband was killed

Can you tell us about you and your slain husband?

My name is Joy Aondover. I am a 28-year-old housewife with four children. We were in bed on the night of July 18, 2020, when, suddenly, we heard the sound of a vehicle approaching our compound. Moments later, we heard a knock at the door, but we did not open the door. Barely two minutes after the knock, the soldiers hit the door and forced it open. They pulled us off the bed and threw us outside. They asked us to kneel down while some were searching the house.

When they did not find anything, they came out removed my wrapper and tied my husband, leaving me half-naked. After tying him, they started beating him until he burst into tears. One of them went to the Hilux van and brought a military camouflage uniform and dropped it by his side. Another saw an old cutlass by the kitchen and brought it. Thereafter, they snapped him and the items before forcing him into the Hilux.

I was told that they took him to their base at Amadu, near Takum, and on Sunday, July 20, 2020, I cooked food and took to him. But on getting there, the soldiers warned me never to come to their base again. They said if I was a man, they would have detained me. That was how I returned helplessly.

How many children do you have and what have you told them regarding the whereabouts of their father?

I have four children and they have been crying all day, asking about their father. I tell them that their father travelled but would soon be back.

Do you know where your husband is at the moment?

My husband was killed and dumped in a well in the bush around Tor-Iorshaer, in the Wukari Local Government of the state. A Fulani man, who saw how the soldiers dropped them in the well, later went with my late husband’s younger sister and showed her where he was dumped in the well with his cousin. She wore a hijab and followed the herd of cattle with Fulani herdsmen and they trekked for several kilometres before they got to the place. She told me, when she came back, that my husband and his cousin, Mr Clement, were killed by the soldiers and dumped in a well.

How did you receive the news of his death?

I am still in shock over his death. He was not sick. He was not involved in an accident but was murdered in cold blood by men suspected to be of the Nigerian Army for no just course. No reason was given for the raid of our house, his arrest and subsequent death. It’s sad that army personnel have robbed me of our joy, hope and love.

Was your husband on the wanted list of the military before the incident?

Seriously, I don’t know and nobody has mentioned that to me. He was a mechanic and a farmer, who lived a low-profile life. I bet you that a good number of people in our community would attest to his humble lifestyle.

But why was he a target by soldiers?

I really cannot tell. The soldiers, from what we were told, were deployed to check the activities of criminals in the area and my husband was not a criminal. None of his friends was a criminal. It’s still a mystery to me that he is no more.

How have you been coping with the four children?

It’s been tough, seriously. I have to manage my emotions so as not to paint the true picture of what has befallen their father. The children usually cry to me, asking me when their father will come back home. I have lied several times to them that their father would soon come back. And now, they can’t take that anymore.

What was your husband’s future plan?

He used to tell me how he intended to see the children through school and ensure the children were successful. On that fateful Friday, he told me of his plan to build a house for the family in the dry season.