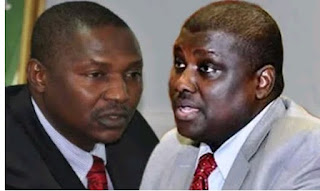 contrary to claim by the AGF that Maina was given clean-bill-of-health by the a court of competent jurisdiction, a copy of the judgment obtained by Vanguard on Wednesday, revealed that the court merely quashed a warrant of arrest that was issued against the former pension boss by the Nigerian Senate.
The judgment which was delivered on March 27, 2013, by Justice Adamu Bello of the Abuja Division of the Federal High Court (now retired), only faulted the process that led to the issuance of the warrant of arrest against Maina.
The court however did not clear Maina of allegation by the Economic and Financial Crimes Commission, EFCC, that he embezzled pension fund to the tune of N2billion.
The court, in its judgment, equally did not insulate Maina from EFCC's investigations.
Rather, Justice Bello advised Maina to surrender himself to the authorities investigating the alleged N2 billion fraud.
The court said there was no evidence that the investigation Senate commenced against Maina was "one validly commenced in accordance with the provisions of Section 88(1) of the 1999 constitution".
It held that Senate investigative committee failed to annex vital documents to show that the ex-pension boss was accorded fair treatment before the warrant of arrest was issued against him.
Exerpts from the judgment read: "The implication of the failure to produce and annex these vital documents to the counter affidavit of the 1st, 2nd, 3rd, 4th, 5th, 8th and 9th respondents is that there is no evidence before me to show that the investigation commence by the said respondents is one validly commenced in accordance with the provisions of Section 88(1) of the 1999 constitution.
"If it has not been validly commenced in accordance with the Constitution, it follows that the summons or invitation to the Applicant (Maina) to appear before the Committee would not have been validly issued and ipso facto, the warrant of arrest was not validly issued.
"In the circumstances therefore, I am bound to set aside the warrant of arrest issued by the 2nd respondent which threatens the right of the applicant to his personal liberty.
"Consequently, the warrant of arrest issued by the 2nd respondent for the arrest of the applicant is set aside.
"I grant relief-1 contained in the statement. I also grant an order of perpetual injunction restraining the respondents jointly and/or severally by themselves and or their agent, privies, servants, however so called from arresting the applicant on account of the warrant of arrest which has been set aside.
"However, beyond these two reliefs, given all the facts available to the court, the applicant is not entitled to any other relief.
"My decision is based purely on the failure of the respondents to annex the vital documents I mentioned, otherwise, the applicant would not have any case at all.
"The decision should not therefore send a wrong signal to the public that the senate does not have the power to cause an investigation within the purview of the powers conferred on it by Sections 88 and 89 of the Constitution with respect to the matters enumerated therein.
"It has such powers and when properly exercised, it can summon any person in Nigeria to give evidence and can also compel the attendance of any such person.
"Let me end the judgment by advising the applicant to submit himself voluntarily to the investigation by the senate in order to show that he respects constituted authority.
"It is the least expected of him as a public officers and as a citizen of Nigeria", Justice Bello held.
Cited as respondents in the fundamental right enforcement suit Maina lodged before the court in 2013 to quash the arrest warrant against him, were, the Senate, Senate President, Clerk of the Senate, Senate Committee on Establishment and Public Service, Senate Committee on State and Local Government Administration, Inspector General of Police, Attorney General of the Federation, Senator Alloysius Etok and Senator Kabiru Gaya.
Meanwhile, in his letter requesting that Maina be recalled to Service, the AGF, maintained that the "legal import" of the high court judgment was that the ex-pension boss had no case to answer.
The AGF's controversial letter with Ref. No. HAGF/FCSC/2017/Vol. 1/3, addressed to the FCSC and entitled "Re: Demand for update on the re-instatement of Mr. Abdulrasheed Abdulahi Maina as Director in the Federal Civil Service, a copy of which was sighted by Vanguard on Wednesday, read:
"Attn: Deaconess J. O. Ayo, OON.
"Your letter on the above captioned subject matter refrenced FCSC/CHMN/OC/17/Vol. XIV/209 dated 3rd March 2017 and the letters copied to the Office of the Honourable Attorney General of the Federation by the office of the Head of the Civil Service of the Federation on the same subject matter respectively referenced HCSF/LU/COR/FCSC/749/III/84 dated 27th March 2017 and 20 April 2017 refer

Extract from Vanguard and Ejesgist

ZONING AS A TOOL FOR ELECTORAL VICTORY: FACTORS APC MUST CONSIDER IN ITS CHOICE OF...