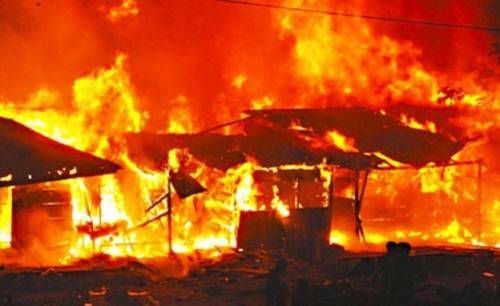 According to NewTelegraph, armed bandits have reportedly killed 21, including 16 members of the same family in an attack in Kaduna. The act came as a revenge attack by criminal gangs on the village of Bakali.

This was disclosed by residents on February 13.

Gunmen on motorcycles had raided the village of Bakali in Kaduna State on Tuesday. They shot sporadically and set homes and vehicles on fire. The attackers were said to be on a mission to avenge a raid on their hideout by local vigilantes.

A community leader in Bakali, Sani Nuhu, who confirmed this to journalists, said the attackers killed 21 people.

Furthermore, residents revealed that the assailants burnt 16 members of the same family alive; including six children. Also, five members of the Civilian Joint Task Force (JTF) were burnt alive after locking themselves up in a house.

Meanwhile, the Kaduna Police Command admitted that it had received reports of an attack in Bakali; located in Fatika District of Giwa LGA. Nevertheless, spokesman of the Command, Muhamnad Jalige, noted that the casualty figures could not be ascertained. Sources reveal that the area where the attack happened has been a haven of sorts for criminal gangs.

The gangs were alleged to have been engaged in cattle rustling and kidnapping for ransom in recent years. Consequently, local communities had to inform vigilance groups to protect themselves. However, this had not succeeded in quelling the crimes.

Seeds Of Destiny Today 24 September 2022: The Voice Of God In The Word Of God