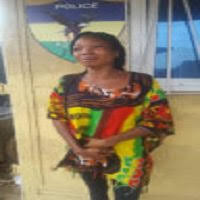 Her boss immediately lodged a report at the nearest police station in Surulere and she was traced to the residence of one of her friends at Ajah.

Amaha who came to Lagos in 2014, said she had first worked as a maid for another woman  who paid her N20000 per month and enrolled her for a diploma programme at the Isolo campus of the  Lagos State Polytechnic in Isolo.

“After staying with her for two and  half years, she started complaining that I was returning late  from school and that I was no longer  performing my home chores. I left when her complaints became unbearable for me.

“When I left her house, I went into the street and started doing prostitution. When my brothers heard that I was into prostitution, they asked me to come back home. I went back to our village. From there, I  went to Onitsha, Anambra State, where I spent some time with my brothers.  When I came back to Lagos I worked as a house help with a woman in Ikorodu for three months and went back to the village and started farming.

“I came back to Lagos again to look for job in order to raise money. I approached one Mr Frank who is a job agent and he led me to one Mr. Ade who linked me up with the woman in Surulere whom I started working for. However, before I started working for the woman she told me about herself and gave me advice on how to work for her and she said that my salary would be paid through my agent.

“But I gave her a  fake name and address because I had the intention of stealing her money or anything of value which I could  easily sell. So,  when I   got to the woman’s house around noon, we went to the airport around 3:30pm to pick her sister and we parked all the woman’s luggage into the house. I later opened the bag and took six pieces of $100, five pieces of  £20 , five pieces of $20totalling $700 and  £100 pounds. I changed $100 and made my hair with it and bought a new pair of slippers.

READ ALSO : Teacher admits to killing and chopping up girl with albinism for rituals

‘’I changed the remaining money and deposited it into my account.  I stole her money because I got a call from my village that my mother was sick.  Please help me to beg her to forgive me. I will not do it again