Recap of ‘House of the Dragon episode 8: Family Matters.

House of the Dragon takes its time and enjoys the (uncomfortable) silence.

This epic series tells the story of House Targaryen 200 years before the events of Game of Thrones.

In the opening scene of House of the Dragon’s eighth episode, ‘The Lord of the Tides,’ a lightly treasonous Vaemond Velaryon informs Princess Rhaenys, “My brother cares only for the history books.” Corlys Velaryon (Steve Toussaint), who is currently lost at sea, has declared his desire for the Driftmark throne to be passed down to Rhaenyra’s son, Lucerys Velaryon.

Vaemond is concerned because it has been widely reported, and this show has confirmed, that Rhaenyra’s mop-haired children are illegitimate. If Driftmark is passed down to the young prince, the Velaryon name will be preserved, but what about the Velaryon blood? What about the family’s living, breathing members? Should history really have a say in what happens in the present?

This has emerged as a central theme for House of the Dragon eight episodes in; its characters wrestle with their decisions, weighing their desires against public perception (both in the present and the future). The viewer’s familiarity with the history of this world – Game of Thrones begins nearly 200 years later – adds another layer to the unfolding history.

Family Matters recap of House of the Dragon episode 8

The Targaryen dynasty perishes, remembered mostly for their dragons, incest, and insanity, but watching these characters act as if they could live forever has a strange allure to it.

Following last week’s upheaval, things have calmed down. Daemon (Matt Smith) and Rhaenyra (Emma D’Arcy) are newlyweds with two children and a third on the way. As Viserys’ health deteriorates, Alicent (Olivia Cooke) and her father Otto (Rhys Ifans) have taken greater control of King’s Landing.

And, as word spreads across Westeros that Vaemond will be vying for the throne of Driftmark, Daemon and Rhaenyra travel to King’s Landing to assert Lucerys’ right to the throne. Rhaenyra’s reputation is at stake once more: the legitimacy of her children, a reflection of her own choices, haunts her with a real threat.

House of the Dragon episode 8

As the various factions gather to discuss Driftmark – and seeing these families together emphasises how unfit they all are to rule – lines are drawn between Vaemond and Rhaenyra’s families.

This epic series tells the story of House Targaryen 200 years before the events of Game of Thrones..

It’s a minor plot, made even minor by Viserys’s last-minute intervention. He seeks Rhaenys’ advice, and she decides to support Lucerys while also announcing the marriage of the Targaryen prince and Rhaena (Rhaenys’ granddaughter). That was a last-minute manoeuvre devised by Rhaenyra, demonstrating some shrewdness on the heir’s part. Vaemond is outraged and insults Rhaenyra and her children. Daemon, enraged, slashes off his head. This was pause-worthy, gasp-inducing television.

Matt Smith is head and shoulders above everyone else here; the excitement is getting to know Daemon better, and the thrill is not knowing what he’ll do next. He’s wiped out entire towns, murdered his first partner, and turned into a bloodthirsty wife guy.

Apart from the beheading, which has an almost comic tone thanks to a well-placed punchline and a visual style reminiscent of mid-2000s slasher movies, the main action takes place at the Targaryen family dinner between Rhaenyra and Alicent’s clan.

These events are so tense, such bloody and cruel affairs, that you fear those young people will not survive. (That killer atmosphere is mostly due to Alicent’s deeply disturbing children: drunken philanderer Aemond has married his sister Helaena since last week, while one-eyed Aemond has become the show’s eye-patched arch-antagonist.)

It’s much smarter and scarier to play it awkward. This series began with an attempt to keep Westeros peaceful and Targaryen rule intact. Viserys, who appears to be nearing the end of his reign, is unable to keep his close family from bickering. Those murderous princes are bound to cause some havoc.

But, in the midst of the silences and hard stares, something thaws between Rhaenyra and Alicent, who remember that they have more in common – even if many of their mutual interests divide them – and their bodies visibly relax as they circle around reconciliation. While Rhaenyra is a fan favourite, Cooke deserves credit for introducing Alicent to a chilling, unhinged mystery.

What about those last few seconds? The last gasps of a drugged-up king, the invocation of “a song of ice and fire” (the title of Martin’s book series, as well as Aegon’s dream of Targaryen rule)? Alicent’s misinterpretation of Viserys’ words will no doubt fuel the ensuing civil war, but a sense of resignation appears to be setting in among Westeros’ royalty, aided by the show’s visual darkness.

The recap of House of the Dragon episode 8

Rhaenys, who has effectively become childless over the course of two episodes, appears to accept her continued misery. Rhaenyra adores her children, but her enthusiasm for the throne appears waning.

Alicent’s political hunger appears to be motivated more by her personal vendetta against Rhaenyra than by a desire to rule. Only Otto Hightower openly embraces ambition; in Viserys’ absence, Ifans’ wide-legged perch atop the Iron Throne was one of the episode’s more memorable images.

Ifans’ slightly self-conscious scramble for the throne is a useful metaphor for this show; these characters are both attracted to and embarrassed by their desire for power.

As the season finale of House of the Dragon approaches, you suspect something monumental is on the horizon to galvanise them. 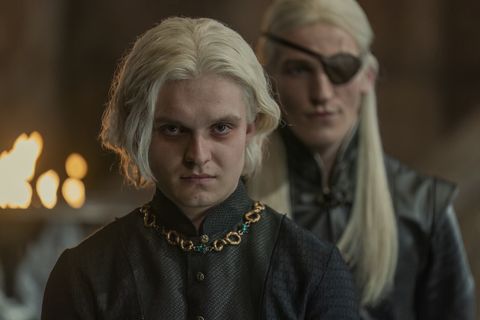 That for reading about House of the Dragon episode 8 Family Matters Recap.