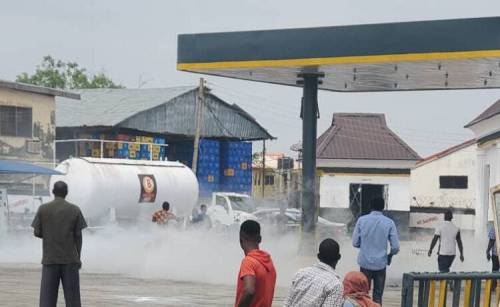 As many as 20 people have sustained injuries after a gas explosion occurred at a Bovas filling station, in Ilorin the Kwara State capital, according to SaharaReporters.

It was gathered that the incident which happened on Wednesday at Offa Garage saw many people scuttling to safety.

Speaking with journalists, a bread seller who witnessed the incident at the filling station, Mrs. Iyabo Olorunnisola, said, “The explosion happened some minutes to 11 am and we just heard a loud bang and smoke taking over the whole filling station and we all scampered to safety, not knowing what was happening.

“In the ensuing melee, several people sustained bruises, while some of those in the filling station like hawkers, petrol attendants and those buying fuel were injured.”

Also, a shop owner, Mr. Azeez Iyiola, who spoke on the incident, said, “The explosion was from the commercial gas plant located inside the filling station.

“It was dispensing and suddenly exploded, it was however immediately brought under control, although several people sustained varying degrees of injury.”

460 New Cases Of Coronavirus Recorded In Nigeria As Total Number Escalates To 30,249