Pandemonium erupted in the early hours of Sunday morning when a high tension electric wire snapped and fell on six worshippers during a Sunday church service, causing six people to be feared dead. 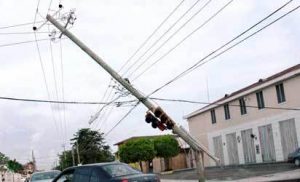 The incident involved a high tension connection between the Cherum & Seraphim, C&S, Church’s flag pole and the ground, which resulted in the electrical shock of approximately 6 adult males in the vicinity.

As of right now, men from the Agege Fire Station of the Lagos State Fire and Rescue Service are on the scene, attempting to save lives and protect property in the surrounding area.

Mrs. Adeseye Margaret, Director, Lagos State Fire and Rescue Service, confirmed the incident but said it was too early to determine the exact number of deaths because some of the victims were still unconscious at the time of publication.

According to Adeseye, the Ikeja Electric Distribution Company was informed and, as a result, power distribution to the environment was de-energized while rescue operations continued amid restiveness among youths and a tense situation in the area.

Meanwhile, as of the time of this publication, it was not possible to determine the true identities of the victims.