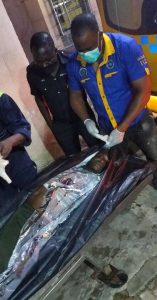 The Lagos State Emergency Management Agency (LASEMA) says it has recovered the corpse of a policeman killed by a ‘hit and run’ driver along Lekki-Epe Expressway, Lagos.

Dr Olufemi Oke-Osanyintolu, Director-General, LASEMA, made this known in a statement in Lagos on Monday.

Oke-Osanyintolu said the Response Team of the agency recovered the remains of the victim at Marwa, along Lekki-Epe Expressway.

He said that the unidentified vehicle flee the accident scene immediately it occurred.

“The deceased, an officer of the Nigerian Police Force named Mr Paul Omaji, in mufti, was found dead at Marwa, along Lekki-Epe Expressway.

“Investigation conducted at the scene revealed that an unidentified vehicle ran into the officer on his way to resume duty around 12:30am on Monday.

“The unidentified vehicle flee the scene immediately the incident occurred.

” The deceased body has been bagged, as the LASEMA responders alongside the officer on ground, Mr Edoh Samuel, has transported the deceased body to Marina General Hospital with the aid of the Agency’s Ambulance.

“The corpse was handed over to another Officer, Superintendent of Police (SP) Onajide Olabode, and has been deposited in the morgue,” Oke-Osanyintolu said.

In a related development, LASEMA Response Team has recovered a yet-to-be-identified dead commercial motorcycle operator, who was involved in a lone accident at Ikota, along Lekki-Epe Expressway.

Oke-Osanyintolu said that the deceased reportedly lost control while on motion and rammed into an electrical pole on the road median at Ikota, along Lekki-Epe Expressway.

“The commercial motorcyclist was critically injured which led to his death before he was admitted in the nearest hospital.