Following several confirmed reports of Genevieve Nnaji’s sudden disappearance from the social scene and deleting all her Instagram posts, it has now been reported that the actress has been admitted to the hospital after suffering a mental breakdown.

Gistlover, a controversial blogger, claimed that the actress is suffering from mental illness and has sought treatment in Houston, Texas.

The actress was allegedly admitted to a Texas hospital for psychosis, the name of which has been withheld for privacy reasons.

According to Gistlover, the actress had a mental breakdown and had tattooed her body with a blade.

According to the blog, her team members are attempting to conceal the news by deleting all of her Instagram posts.

Hello tueh tueh, please pray for actress Genevieve Nnaji as this is a trying time for her. According to information reaching vawulence headquarters, the actress us currently does with ment issue and currently taking treatment in Houston, Texas. Genevieve has been admitted for psychosis in a hospital in Texas (Name withheld) she went loco some months ago they are hiding the info like say tomorrow no dey and we can’t help but tell her fans so they can put her in prayers. Fans has been questioning her weird attitude of recent on Instagram and the fans has been cuteness, some are even dragging her that she is proud, why can she unfollow everyone, bla bla bla, the truth is they had to take her phone from her and archive all her post. CN you remember when she was posting plenty random weird stuffs? Then she tattooed a cross on her wrist with a blade, was so terrible that they had to keep an eye on her. She was admitted sometimes this year and we hope she recovers fast, her media aid are really working overtime to keep the story out of the public but I feel they should let the world know so they can out her in their prayers and not drag her unnecessarily, they can come out to debunk it oo, but it is what it is, they know the truth, sometimes I feel fame demands too much from these celebrities, because what she find, get charisma, has one of the best brand for Nollywood, why drug again? Why???

I think say Na only lesbianism we go tackle for her body, not knowing the one wey senior lesbianism dey her body. I remember then wey Genevieve go invite girls over for her pleasure, tell them to submit phone for her gate, you dare not come in with your phone, now this again, LoRD take charge is fame really worth ones life, is it worth the stress, I coke in peace oooo. Prat for Ini, she is not proud fo have unfollowed everybody. Her media aid did that, I no sabi wetin them dey cover. Igi ewedu oni pawa oooo. Say no to drugs”. 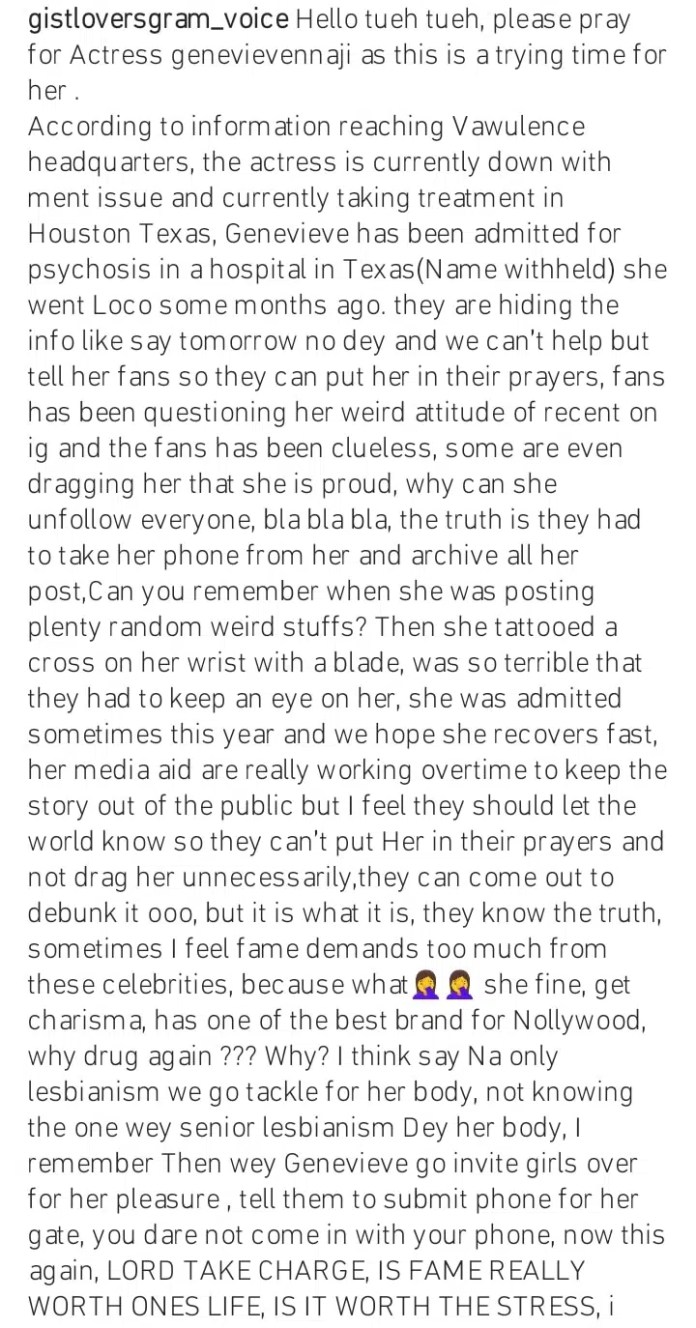 She turned 43 on May 3, 2022, but many of her fans were concerned when she didn’t post anything to commemorate the occasion.

Genevieve Nnaji has become a household name in the Nigerian film industry thanks to a slew of awards and accolades.

The Nigerian Oscars Selection Committee (NOSC) chose her film, “Lionheart,” as Nigeria’s submission for the best international feature film category of the 2020 Oscars.