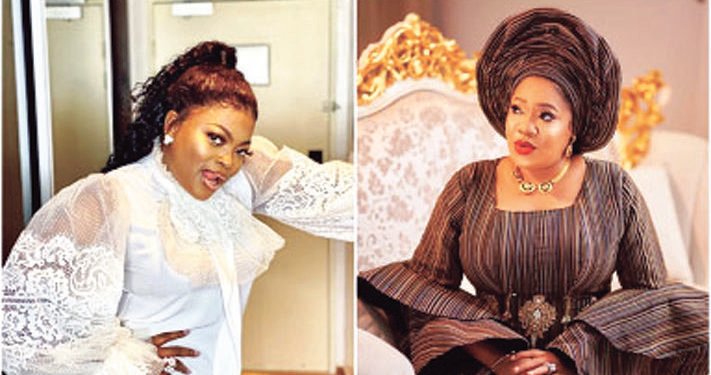 Two Nollywood superstars are currently cashing out after releasing their recent movies.

According to TheNation, two films produced by Funke Akindele-Bello and Toyin Abraham have over N300 million in 2020.

Mrs. Akindele-Bello’s ‘Omo Ghetto: The Saga’ and Mrs. Abraham’s ‘Fate of Alakada,’ each grossed over N100 million in cinemas after the Cinema Exhibitors Association of Nigeria released the 10 highest-grossing films of 2020.

The success of the films put the actresses and producers at a vantage position ahead of a new film year.

Speaking on the achievement, Akindele-Bello noted, “Number 1! It’s by God’s grace! Omo Ghetto: The Saga Movie is a great film, so if you’ve not seen it, it’s time to go watch it.”

On her part, Abraham said, “I’m so happy to return to this great news after a long flight. OMG! Fate of Alakada ranked 3rd on the list of highest-grossing movies of 2020 with all these top Hollywood films on the list. I just want to say a very big thank you to God whom all praise is due, my team, my ever loyal fans, Toyintitans, and to everybody who made this happen by going to the cinemas tirelessly! ?sé mo dúp?´ ó! I love you guys much! God bless you all, 2021, let’s do more!”