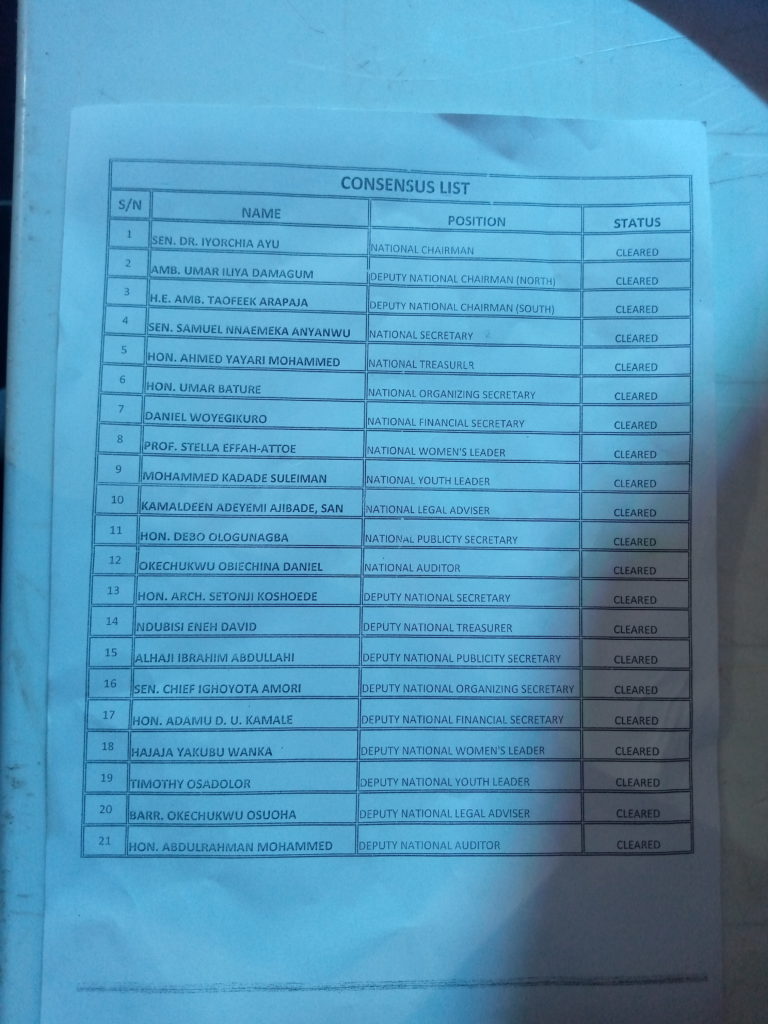 Before the convention, the 13 governors of the Peoples Democratic Party (PDP) made it clear that they were not interested in a heated political contest, but rather in a consensus arrangement that would see them select the 21-member national officers’ list to serve the party for the next four years.

Delegates at the ongoing national convention of the Peoples Democratic Party are about to vote for candidates of the National Working Committee membership.

Those from Abia State were called to come forward and cast their ballots at 5.04pm.

The states are to vote in alphabetical order.

As of Friday night, 19 of the 21 positions had sole candidates, leaving the offices of the Deputy National Chairman (South), National Auditor and Youth Leader to be contested by aspirants.

Following a failed attempt by the Peoples Democratic Party’s (PDPsuspended )’s National Chairman, Uche Secondus, to halt the party’s national convention, 3,600 delegates will gather in Abuja on October 30 and 31 to elect new leaders for the country’s leading opposition.

The convention was initially in jeopardy until the Court of Appeal, Port Harcourt Division, dismissed Mr Secondus’ suit challenging his suspension and seeking to halt the event on Friday.

At the convention, at least 27 candidates will compete for 21 positions on the party’s National Working Committee (NWC).

The full list of those cleared to run for the positions by the screening committee chaired by former Attorney General of the Federation, Mohammed Adoke, was published by PREMIUM TIMES.

Most of the candidates, however, will be elected unopposed after successful negotiations by the National Convention Organising Committee, led by Adamawa State Governor Ahmadu Fintiri and other party leaders, to find a consensus candidate for each position.

The North had chosen Iyorchia Ayu, a former senate president, as its consensus candidate for the position of national chairman.

Because he is not from Imo State, where the position is zoned, Okey Muo-Aroh (SAN) who expressed interest in the position of national secretary was disqualified.

Our correspondent is  at the Eagle Square, Abuja to bring you live updates of the convention.

The PDP opened the National Convention at 1:05 p.m. with a stanza from Nigeria’s National Anthem.

Samuel Ortom, the executive governor of Benue State, and Shehu Wada, the chairman of Kano State, prayed in Christian and Muslim ways, respectively.

Mr Ortom said as the party officially kicked off the day’s events, “We prayed to you Lord to give us a second chance like you did in 2019.”

Delegates from the 36 member states and the FCT are all seated, with the exception of those from Ogun, Ondo, and other states in the southwest zone at the time of this report.