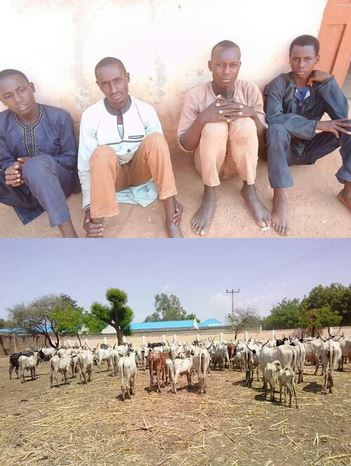 Four suspected bandits/cattle rustlers have been apprehended by operatives of the Katsina State Police Command with 208 rustled animals recovered from them.

Spokesperson of the command, SP Gambo Isah, who disclosed this on Tuesday, May 11, said the suspects, Isiya Halliru, Nasiru Bature, Bello Hamza and Hassan Iliyasu, are members of a notorious bandit syndicate.

“On 10/05/2021 at about 11:00hrs, based on credible intelligence, the Command succeeded in smashing a notorious syndicate of bandits terrorizing Kankara and its environs,” Gambo stated.

“In the course of investigation, suspects confessed that the animals belong to their masters living in the dreaded Rugu forest, who failed to show up and claim ownership of the suspected animals. The animals have been handed over to the state standing committee for further necessary action. Investigation is ongoing.” he added.

85-year-old woman, three others released by terrorists after 143 days in captivity

“Normalize Praying For Your Woman, A Lot Depends On Her Happiness ” BBNaija’s Neo Tells...

Man Spends N6.6m On Plastic Surgery to Look Good After He Was Denied A Job...