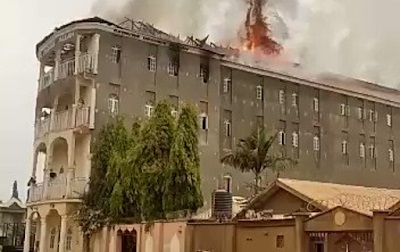 The authorities of Albany International School, Zaria confirmed the death of a JSS 3 student, Abdurahman Doko, in a fire incident that gutted a hostel on Wednesday.

The fire, which started around 12.30 p.m., destroyed the male students hostel of the school situated at Gaskiya Layout in Zaria, Kaduna.

Dr. Abdulraheem Abdulganiyyu, the school director, told the News Agency of Nigeria(NAN), that the cause of the incident had not been confirmed.

“As at the time the fire started, there was no electric power at the school, and no cooking activities are allowed in the hostel. The school kitchen is not located around the hostel. So, we are still at a loss,” he said.

The director commended the Fire Service for its prompt response that stopped the fire from spreading.

Abdulganiyyu explained that the school was on vacation, adding, however, that final year students, who were preparing for the West Africa School Certificate and UTME, were around.

He said that Junior Secondary School students, who were also preparing for their Junior School Leaving Certificate, were also around.

According to him, as at the time the fire started, all the students were in their respective classes on the ground floor of the school.

Corroborating, Umar Mohammed, Sectional Head, Fire Service, Zaria said that only Doko died, while the cause of the fire was still unknown.

Mohammed added that other students on the ground floor were safely evacuated, adding that the prompt response quickly quenched the fire.

He advised members of the public to ensure that all electrical appliances were switched off when not in use, while extra care should be taken when cooking.

“Many households are reverting to the use of cooking gas for domestic purposes; we must strive to adhere to safety practices to avert fire outbreaks,” he said

Watch the video as shared by Amir