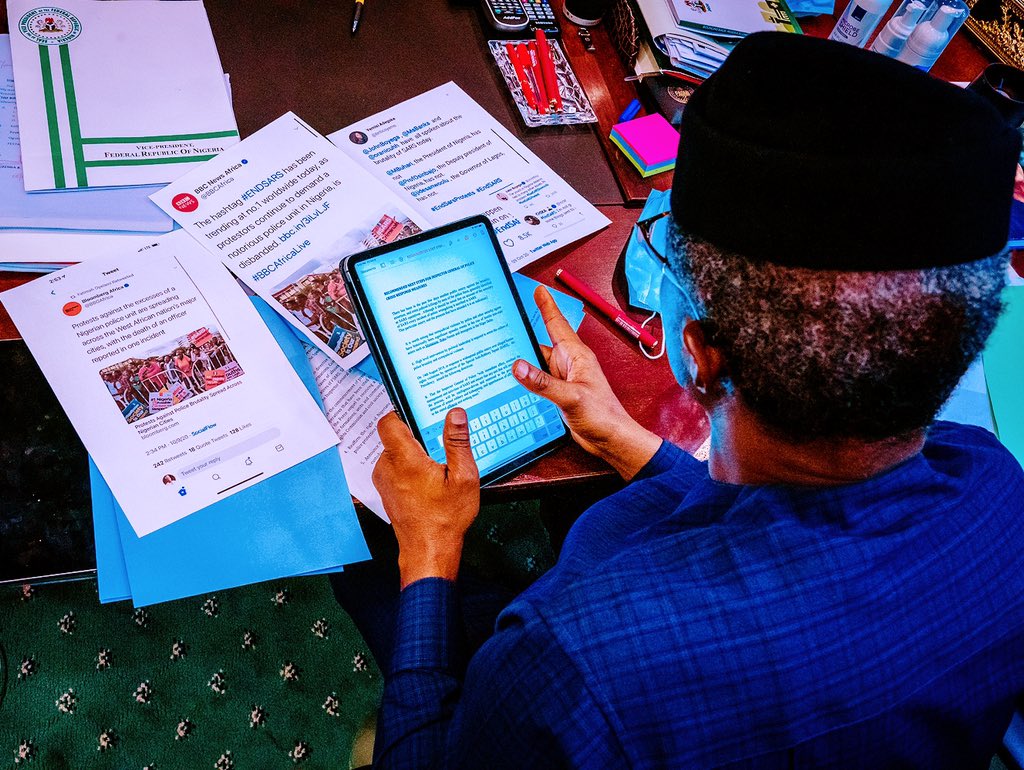 Angry Nigerians have pounced on Vice President, Yemi Osinbajo for his comments on End SARS.

On Friday, Osinbajo admitted that the federal government could have acted faster on issues that affect them.

The VP said he understood many young people felt the government was silent and had not done enough.

He noted that the frustrations were justified because there are too many people who have been brutalised by the police.

“We must take responsibility for protecting young people, even sometimes from those who are paid to protect them”, Osinbajo said.

He highlighted government’s efforts in the past one week and actions being taken to ensure that the demands of protesters are met.

On Twitter, Osinbajo ended his statement with a photo showing printed out tweets from Bloomberg Africa and BBC.

This infuriated Nigerians who are saying that the government is more concerned about “international disgrace” rather than resolving the issue.

Thousands have retweeted and reacted to his message. Most respondents say they are tired of epistles and want quick actions.

“I’m not surprised. This is exactly how our young people in politics, print critics’ tweets to show their principals in order to influence political appointments”, @Omogbajabiamila replied.

“Nothing captures the disdain our leaders have for anything Nigeria like this particular tweet. Nigerian media houses have been consistently and truthfully reporting these #EndSARS protests but the VP thought it was best if he panders to foreign interests. We don’t matter”, @nicholasibekwe wrote.

“You just agreed to NIGERIANS that you people have not been transparent and accountable. Just know if u are found guilty of any crime during your time in office, you will be charged. Those youths that have died, their blood will hunt all of you”, @Samklef tweeted.

ALSO READ : Our focus is to take Nigerians out of poverty, Osinbajo says

Why I had surgery in Nigeria — VP Osinbajo