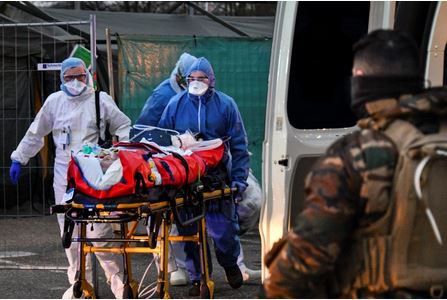 Two men, including a suspected member of a jihadist network, have been arrested in Tunisia.

The two men were arested over an alleged “terrorist” plot to infect security force personnel with coronavirus, Tunisia said on Thursday.

The Agence France Presse, AFP, reports that the suspected jihadist is accused of having used his influence over supporters displaying symptoms of the virus, the interior ministry said in a statement.

The other accused, who was already under surveillance and required to report regularly to a police station, said that he was told to deliberately cough everywhere to contaminate officers during his visit, the ministry said

Tests are being carried out to determine if the second arrested man is infected with the novel coronavirus, the ministry said.

The two men were arrested on Monday in Kebili in southern Tunisia, according to National Guard spokesman Houssem Eddine Jebabli.

Tunisia, which has registered hundreds of coronavirus infections and several dozen deaths, has been under a state of emergency since a string of jihadist attacks in 2015.