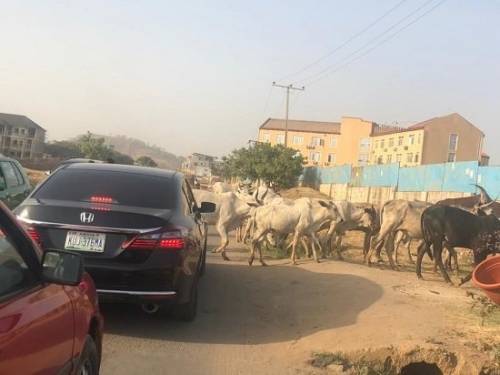 It has been reported that many cows blocked a major road in the Apo area of Abuja on Saturday.

For many minutes, the situation caused a disruption of vehicular movement.

Motorists were forced to stop their vehicles in various pictures seen by Ejes Gist Nigeria to pave the way for the cows to move freely on the road.

The photos, however, drew anger from many Nigerians on social media.

A Twitter user, @Sunkee84 wrote, “This is insane, this can not be tolerated in 2021. FG ( Nigerian government) should do something about it.” 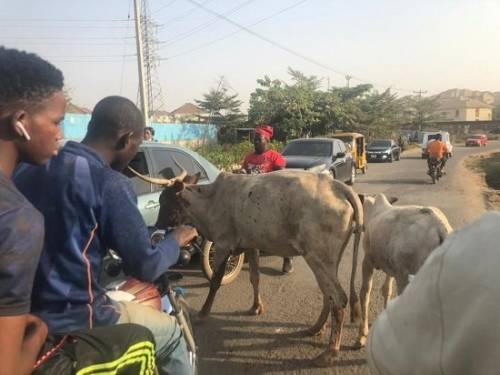 Another user, @babeseidah, said, “This is not new, they do that all the time. People living in Lugbe, most especially River-park Estate, can relate.”

The Abuja administration had in 2016 banned movement of cattle on public roads.

The then Minister of the Federal Capital Territory, Muhammad Bello, also inaugurated a task team to keep the cattle off Abuja’s streets. 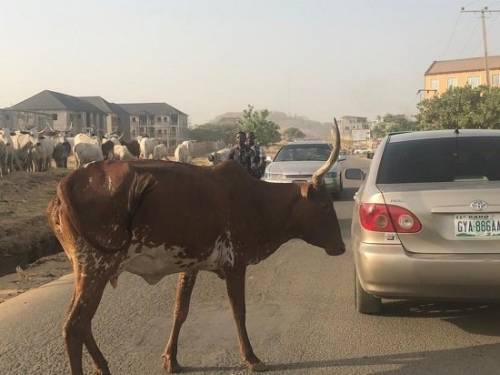 “You have to understand that when Abuja Environmental Protection Board says cattle should not roam the city, it is not because they want to prevent cattle breeders from raring cattle in the FCT. It is just for safety. It is for the safety of your cattle and above all, the citizens’ safety.

“In a modern city, it’s not possible for animals and vehicles to move together on the roads because this could cause accidents which in some cases could be fatal, and we must protect lives and property,” the former minister had said.

Another Strike Looms As NASU, SSANU Is Set To Embark On 3-Day Strike Over IPPIS,...