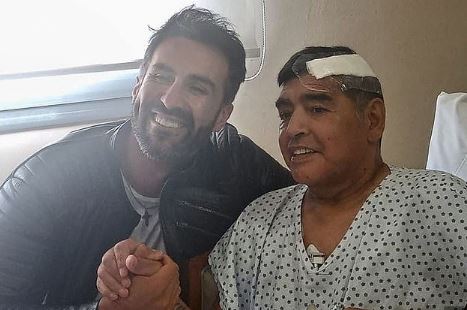 Diego Maradona’s doctor has denied having a hand in the death of the legendary footballer.

Leopoldo Luque has tearfully denied any wrongdoing in his care of the late footballing icon as the police investigation into his death continues.

Leopoldo Luque is being probed over medical negligence and police are treating the footballer’s death as a possible culpable homicide.

But in his first media interview since police raided his home earlier yesterday, the doctor has said ‘someone is trying to find a scapegoat’ where there isn’t one.

Police raided the home of the personal physician Luque on Sunday and investigators are looking into all the medical staff involved with his care.

Luque was at his home while the search on the outskirts of Buenos Aires took place, while Argentinian TV stations have been broadcasting live images of police entering his clinic.

The searches were ordered after Maradona’s daughters Dalma and Giannina gave statements yesterday and questioned whether the medication their father was receiving was appropriate.

Argentinian media are reporting Luque could be questioned as an ‘imputado’, someone who is under official investigation on suspicion of possible mala praxis or negligence.

The physician mounted an emotional defence of his treatment of the soccer legend after the police search of his home.

Luque broke down in tears as he insisted he had done everything possible to assist the retired footballer in his first interview since investigators launched their shock operation to try to establish whether Maradona had been the victim of medical negligence.

Tears rolled down his cheeks as he insisted in a hastily-arranged press conference at his home near Buenos Aires which lasted nearly 40 minutes a ‘friend’ had died and Diego was his own worst enemy when it came to accepting help from professionals.