The Federal High court has fixed a date for Nnamdi Kanu’s bail application.

Federal High Court Judge,  Justice Binta Nyako on Friday fixed May 18 and 26 as the dates for the ruling on the bail application of the detained leader of the proscribed Indigenous People of Biafra (IPOB),  Mazi Nnamdi Kanu.

The court will also rule on the rest of the charges.

EJES GIST NEWSPAPER previously reported that eight (8) of the fifteen (15) counts filed against IPOB leader Nnamdi Kanu were dismissed due to a lack of merit.
Nnamdi Kanu’s Lega defence team, led by Senior Advocate of Nigeria, Mike Ozekhome, had requested a bail hearing, which Justice Nyako scheduled for May 18 and 26, 2022.

Around 11:00 a.m., IPOB Leader Nnamdi Kanu was brought into the courtroom. 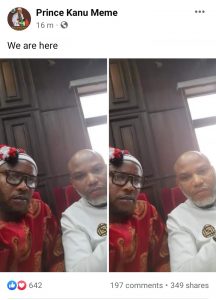 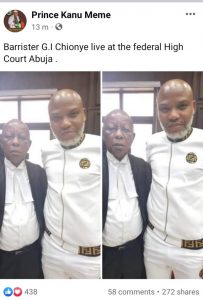 He was brought in again, this time dressed in Fendi.

His attorneys questioned why their client would be denied new clothing when the Department of State Services (DSS) had been ordered by the court to allow him to do so.

Kanu has been appearing in court in the Fendi clothing in which he was detained abroad since last year.