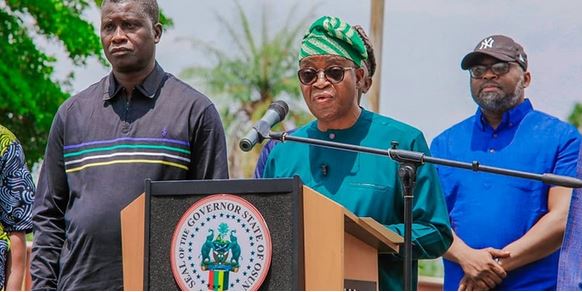 Residents of Osun on Thursday rushed to banks and major markets ahead of lockdown in the state.

Gov. Gboyega Oyetola in a broadcast on Tuesday announced another 14 days lockdown in Osun, effective from midnight of Thursday (today) to contain the spread of coronavirus in the state.

Oyetola had on March 29, announced the first 14 days lockdown in the state, which expired on Tuesday.

The governor, while announcing another 14 days lockdown, said it would be suspended between Wednesday and Thursday for residents to restock.

A news correspondent who went round Osogbo, the capital, reports that there were long queues of customers at Automated Teller Machines (ATMs) and also inside the banking halls.

Some of the customers, who spoke said they were at the banks to withdraw money to restock ahead of the lockdown.

Mrs Ibironke Olawuyi, who was on the queue in one of the branches of First Bank in Osogbo, said she had been on the queue since 7 a.m. to withdraw money.

“I have been on the queue since 7 a.m. and this is already 9 a.m. to withdraw money ahead of the lockdown but as you can see the queue is very long.

“No matter what, I have to withdraw to buy foodstuffs that will last me and my family for another 14 days of the lockdown,” Olawuyi said.

Another resident, Mr Laide Ogunmuyiwa, who spoke at Zenith Bank in Ola-Iya area, said he had been on the queue since 6:30 a.m.

Ogunmuyiwa said he wanted to make use of the few hours remaining before the lockdown to withdraw money to buy what would be needed during the period.

Also at the major markets visited, there was a large number of residents buying foodstuffs.

At the popular Igbonna market, residents were seen rushing to buy foodstuffs such as rice, garri, pepper, tomatoes, among others.

Mrs Toyin Akinkunmi, who was at the market, said she came early to market to buy foodstuffs before the environment became rowdy.

Akinkunmi, however, decried the increase in the prices of the foodstuffs because of the lockdown.

She said the prices of most of the foodstuffs were almost double of what they used to be.

Also, the popular Osun Mall, which houses `Justrite’ was filled to the brim, with people buying different provisions.

There are 20 confirmed cases of coronavirus in the state as announced by the Nigeria Centre for Disease Control (NCDC), while 17 patients had been discharged.