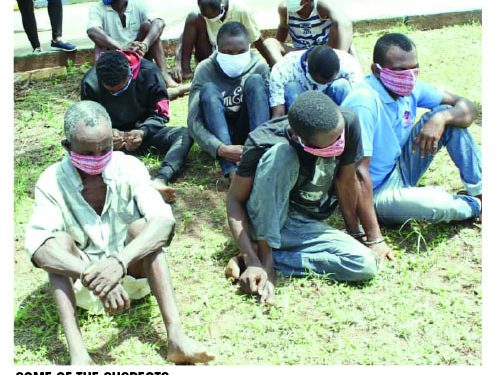 If you call them satanic, evil-hearted and devilish, you will not be exaggerating at all.

They were armed robbers and kidnappers with a unique modus operandi. With specialisation in the abduction of ladies for ransom, these ten men would wait for some time for the family members of their victims to bring ransom. But if the money didn’t arrive in good time, the kidnappers would turn the married women into sex slaves, brutally raping them until they become pregnant. They would then release the women.

This they did for a long time, and succeeded in impregnating as many as eight women. But they are unlikely to do such again. Reason? Some of them have been apprehended by the operatives of the Anti-kidnapping Squad of the Rivers State Police Command.

Some of the arrested suspected kidnappers and robbers are Umeh Palo, 24; Philip Chudo, 25, and Godsday Okere, 30.

The operatives, it was learnt, rescued eight victims, including 23-year-old Ruth Sunday who was freed while the kidnappers were awaiting a N5 million ransom from her family.

The police also recovered over 50 arms and ammunitions, including 15 AK 47 rifles, pistols and magazine from the gang at their hideout at Igbo-Eche, Pinepile and Wilyakara Forest in Bori Local Government Area of Rivers State.

One of the suspects, Umeh Palo spoke with Saturday Sun. He said: “I hail from Bori Local Government Area of Rivers State.  We are 10 members of the gang. We kidnap female victims and we impregnate them. We have kidnapped over 15 female victims and impregnated about eight victims. We usually turned them to our girlfriends if money was not forthcoming from their people. We would later release them.”

Rivers State Commissioner of Police, Mr. Eboka Friday told Saturday Sun that the three kidnappers, after abducting their female victims, would take them to the Etche and Wilyakara forests and collect millions of naira as ransom from their relations. Those who couldn’t pay were raped, impregnated and released.

The police boss said the suspects led the police detectives to arrest one Thankgod alleged to be their arms keeper. Thankgod, it was gathered, led the police to a location in the Wilyakara Forest in Bori where firearms were recovered. The police alleged that the suspects had killed policeman in their check point and their houses.

Deputy Commissioner, Operations, Muazu Muhammed who led the operation, said   he alongside the Anti-Kidnapping Commander, Collins Edward and his operatives stormed the hideout of kidnappers in Wilyakara forest and in Mbano camp in Oyigbo Local Government Area of the state. They recovered Police AK 47 rifles, magazines and 125 cartridges and pump action guns stolen from the police during the #EndSARS protest last year

He further stated that the three kidnappers and their syndicate, between September and November 2020, kidnapped female victims in Port-Harcourt and Elele axis and took them to their hideout. They reportedly demanded millions of naira and ended up impregnating some of the victims. During an encounter with the police, two of the suspects were shot dead while others escaped with bullet wounds and abandoned their arms and ammunition.

“Between December 2020 and January 2021, the same gang kidnapped two female victims in Oyingbo and Mile 1 in Port-Harcourt and took them to their hideout and demanded a ransom. Operatives of the Anti-Kidnapping Squad stormed their hideout after the family of the victims had paid N800,000. Two female victims were rescued from an uncompleted building.

“Between May and July 2020, the same gang kidnapped a husband and wife in Etche and demanded N3million. In the process, N1 million was paid while the husband was released. The wife was raped and impregnated before she was released one month later. The syndicate dumped the victim in a bush and abandoned her there until she was rescued by police operatives.

“On February 28 2021, the same gang kidnapped a female victim, 28-year-old Ruth Sunday along Igbo-Etche Pipeline and demanded millions of naira as ransom from her relatives. The victim was kept for three days in their custody, waiting for ransom until the operatives stormed the hideout. Three suspects were arrested while others escaped. The other gang members were arrested in Port-Harcourt and they have confessed. They took the police operatives to their hideout where AK 47 rifles, magazines, 20 rounds of live ammunition and locally made pistol with cartridges were recovered. The victim, Ruth, was rushed to the University of Port-Harcourt Teaching Hospital for medical treatment,” Muhammed said.