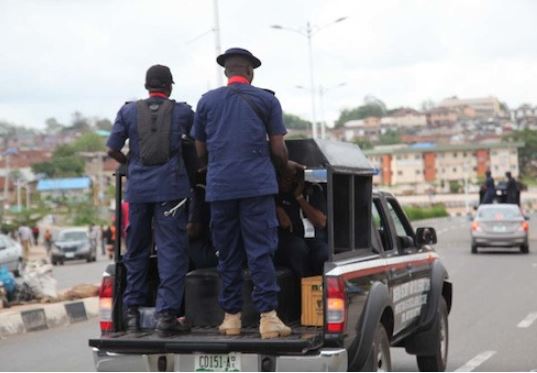 It was pure commotion that took over the Ada George and Location areas of Obio-Akpor, Rivers State, on Tuesday following the alleged shooting of a commercial bus driver by an operative of the Nigeria Security and Civil Defence Corps (NSCDC), according to The Nation.

The operative attached to the state task force was said to have shot and killed the driver provoking a riot that shut down traffic along the ever-busy Ada George, Location and NTA roads.

The deceased driver was reportedly conveying passengers when a vehicle of  task force officials  attempted to overtake him but he  resisted the officials.

In the struggle that ensued, the task force vehicle hit the commercial bus, it was gathered.

A source said the driver out of anger blocked the task force vehicle with his bus.

The source said:  “The driver further called on his other colleagues who immediately joined him to demand for the repair of his vehicle but as the task force and NSCDC officials objected to their demand, the situation became tense.

“Consequently, the situation worsened  when the security operatives engaged all the drivers in a battle.

Sensing danger, the taskforce officials fled while  one of the NSCDC operatives trapped in the pandemonium shot the driver and continued shooting to scare the rampaging drivers.

“The civil defence man escaped as the drivers scampered for safety following his gunshots. But the victim died while being conveyed to hospital,” the source said.

The death of the driver caused pandemonium in the area as  the angry commercial bus driver reinforced and  blocked the roads.

He said: “Yes, I am aware that an  NSCDC officer attached to the state task force shot a commercial bus driver, but calm has returned to the area as our men have been mobilised there.”