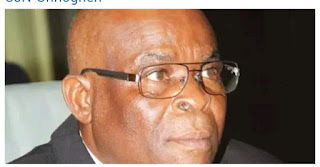 The office of the Chief Justice of Nigeria, Walter Onnoghen, has begun processing lists of all high-profile corruption cases in Nigeria following the submission of the lists by the heads of federal courts and state chief judges.

A source at the office of the CJN told PREMIUM TIMES on Friday that all the courts and states have complied with the directive by Mr. Onnoghen to compile and forward the lists to his office.
According to the source who asked not to be named because he was not authorised to speak with the media, the data containing all relevant information on the cases will be presented to the Anti-Corruption Cases Trial Monitoring Committee as early as next week.

The CJN set up the committee as part of judicial reforms he announced at the beginning of the new judicial year, to ensure that the judiciary dispenses justice promptly on corruption cases in compliance with the letters and spirit of the Administration of Criminal Justice Act 2015.

The Act stipulates among other processes the period within which the head of courts must assign corruption cases to judges as well as issuance of notices of hearing.
The development came against the backdrop of the decision by Justice Ayo Salami to opt out of his appointment as chairman of the committee.

In an interview published by The Punch newspaper on Friday, Justice Salami had said he decided to reject his appointment as chairman of the Anti-Corruption Cases Trial Monitoring Committee in expression of his disgust with the attitude of the judiciary to his controversial removal as president of the Court of Appeal by former President Goodluck Jonathan.
But contrary to insinuation that Mr. Salami was not consulted before he was named chairman of the committee, our source stated that he indeed met with the CJN and consented to the appointment before his name was announced.
According to the source, Mr. Onnoghen was bemused by Mr. Salami's volte face on the appointment.

However, the source said a new chairman will be named to ensure that the committee immediately commences its assignment of monitoring the dispensation of justice on corruption cases on the lists already submitted to the office of the CJN and new ones.
Pri