ABUJA—Catholic Bishops Conference of Nigeria, CBCN, said, yesterday, it was not convinced the Federal Government was earnestly seeking ways to end the wanton killings by herdsmen militia in the Middle-Belt. People march and carry banners to protest against violent attacks across the country in Lagos, on May 22, 2018. Catholic churches in Nigeria held solidarity rally across the country to prortest against a church attack in Benue state that killed at least 18, including two Roman Catholic priests. / AFP PHOTO / The Bishops said the recent killings of over 120 persons in Plateau State showed that government had been paying deaf ears to the repeated calls by well-meaning individuals and groups for an end to the spate of violence by armed herdsmen. 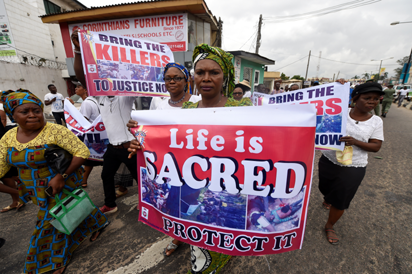 They also accused security agencies of applying double standards in the handling of the crisis between herders and farmers, saying the police react swiftly whenever herdsmen were attacked and killed. A statement by the CBCN President, Archbishop Augustine Akubueze, and Secretary, Bishop Camillus Umon, read: “The latest horrendous massacre of scores of innocent Nigerians, especially children and women, including pregnant women, in Plateau State, by the same rampaging and murderous terrorists, who now seem to be operating without any hindrance in the Middle Belt and other parts of Nigeria, shows that our last statement, like all the others before, has been completely ignored by those, whose primary responsibility it is to protect the lives and property of Nigerians. “Again, the country is likely to witness another mass burial of innocent Nigerians as a result of the serial murderous activities of a group, which clearly seems to be above the law in our country and who, by their actions and words, have insisted that human lives are worth less than the lives of cattle. “This shameful inversion of values portrays our country as barbaric and our society as brutish. “We, the Catholic Bishops of Nigeria, are devastated by these acts of insensitivity and disrespect for the dignity of human life. We are equally sad that the Federal Government continues to find it difficult to proactively address the issue of these wanton killings. “We have said it before and it bears repeating that it can no longer be regarded as mere coincidence that the suspected perpetrators of these heinous crimes are of the same religion as all those who control the security apparatus of our country, including the President himself. “Words are no longer enough for the President and his service chiefs to convince the rest of the citizens that these killings are not part of a larger religious project. “While we vehemently condemn any shedding of human blood and ask the Police to speedily arrest and prosecute the perpetrators of these crimes, we must point out the double standards applied by the same Police any time the herdsmen are attacked and killed. “In this latter case, they react very swiftly and the law promptly takes its course. Would that same swiftness be applied to all cases?”

Those behind Plateau killings unmasked

How to Overcome Any of Your Bad Habits

Senators To Remove Lawan If He Blocks Buhari’s Impeachment

Nigeria Is At The Point Of No Return — US