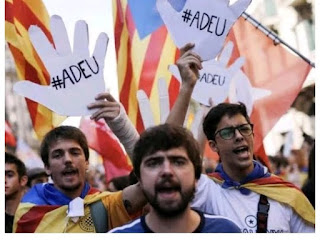 Catalan parliament has voted to declare independence from Spain.
Base on report gathered about seventy lawmakers voted in favour, 10 voted against, while two cast blank ballots.
The decision was made during a secret vote in Barcelona on Friday afternoon.
The names of those who voted for independence was withheld, as the Spanish attorney general promised to charge those who voted in favour of independence with "rebellion".
The declaration comes as the Spanish government is set to vote on the application of Article 155 of the Constitution, which allows Madrid to directly administer the breakaway region.
Two right-wing parties, Citizens (Cs) and People's Party (PP), along with the centre-left Socialist Party of Catalonia (PSC), left the Catalan parliament before the vote in protest.
Alberto Rivera, president of Cs, took to Twitter to call the vote "illegal". Miguel Iceta of the PSC said it was a "spectacular error".
During the special plenary in the Catalan parliament on Friday, Carles Riera from the far-left Popular Unity Candidacy party, asked that the declaration be voted upon.
"We take this step on our feet, with our heads held high. Not on our knees like subjects, but as free people without fear," he said.
Article 155
Earlier in the day, Spanish Prime Minister Mariano Rajoy of PP addressed the Spanish Senate, from which an absolute majority of votes was required to enact Article 155.
Rajoy said Catalan President Carles Puigdemont "was the one who decided to continue moving forward with the process for applying Article 155. It was him and only him."
Four objectives for enacting the article were given by Rajoy: Returning to legality, recovering trust, maintaining high levels of economic growth while creating new jobs and celebrating elections in a situation of normalcy.
The debate consisted of whether or not Spain has right to defend its laws and Constitution against challenges, not against Catalonia.
"The thing that threatens Catalonia is not Article 155, but [the Catalan government]," Rajoy said.
Mirella Cortes, a senator from the Catalan Republican Left (ERC) party, said the Catalans will take "not one step back. Long live the Catalan republic."

Catalans voted in a disputed independence referendum on October 1 that was ruled illegal by the Spanish Constitutional Court and met with police violence, which was condemned by rights groups and European leaders.
The Catalan government said 90 percent voted for independence, but turnout was less than 50 percent.
Puigdemont announced independence on October 10, but suspended the declaration after eight seconds to encourage dialogue with Madrid.
No dialogue is known to have taken place.

INEC AND ALL SECURITY AGENCIES MUST REMAIN NEUTRAL