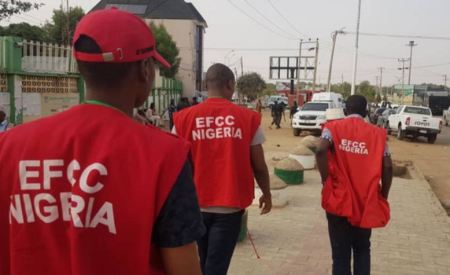 The EFCC officials arrested the man on Saturday for alleged vote buying, The Nation reports.

The Nation gathered that after casting his vote, the EFCC allegedly found the sum of N1.5 million in Dallas’s car.

Dallas who was a former head of Service was arrested at his “Social Welfare” Polling Unit in Dass at the ongoing Dass State Constituency by-election held in Bauchi state and handed over to the Divisional Headquarters of the Nigeria Police Force in Dass for questioning.

However, while briefing newsmen the Chairman of Dass Local Government, Hon. Suleiman Mohammed said that, Dalla was arrested wrongly.

He said: “I was told that one of our stakeholders was arrested and I came to sympathise with him –which is normal. Though, I have not discussed with him but I heard that shortly after he addressed some journalists, he was arrested.

“The money is not his own, the money belongs to our party agents, presiding and returning officers.”