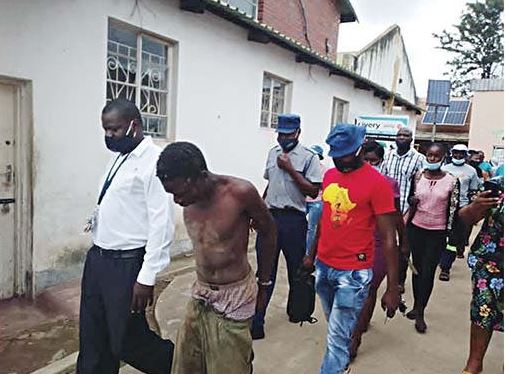 The Suspect being apprehended

A thief met his waterloo after he fell from the ceiling of a shopping complex during an operation in the mining town of Gwanda, Zimbabwe on Tuesday morning, February 23.

The suspect reportedly gained access to the shopping complex  at Emabhizeni along 4th Avenue through one of the shops’ windows before using the ceiling to enter other shops to steal various goods.

A supermarket employee told The Chronicle that he saw the thief in the act and when chased after him, he panicked and fell from the ceiling.

“I was just arriving for work when I heard sounds at the back. I made a follow up as it was still quiet with most people not having reported to work yet. I saw the thief trying to jump from the ceiling.

I managed to climb into the ceiling and chased after him and he fell into a shop next door to us commonly known as China Shop. Security details managed to catch him before he fled from the scene.”

It was learnt that the thief was immediately apprehended by the police and placed in custody as members of the public bayed for his blood.