The query signed by his Chief of Staff, Abba Kyari, was on poor revenue collections.

Fowler, a former chairman of the Lagos Inland Revenue Services (LIRS) believed to have been recommended for the position by All Progressives Congress (APC) leader, Bola Tinubu, was asked to reply by Monday August 19, 2019.

Titled; “RE: Budgeted FIRS Collections and actual collections”, the presidency is seeking explanation of what it suggested was insufficient tax collected between 2015 and 2018.

“We observed significant variances between the budgeted collections and actual collections for the period 2015 to 2018.

“Accordingly, you are kindly invited to submit a comprehensive variance analysis explaining the reasons for the variances between budgeted and actual collections for each main tax item for each of the years 2015 to 2018.

“Further more, we observed that the actual collections for the period 2015 to 2017 were significantly lower worse than what was collected between 2012 and 2014. Accordingly, you are kindly to explain the reason for the poor collections.

“You are kindly invited to respond by 19 August 2019.”
In April, FIRS was enmeshed in alleged fraud.

Top officials were arrested and released by the Economic and Financial Crimes Commission, EFCC, over a multi-billion naira scandal. 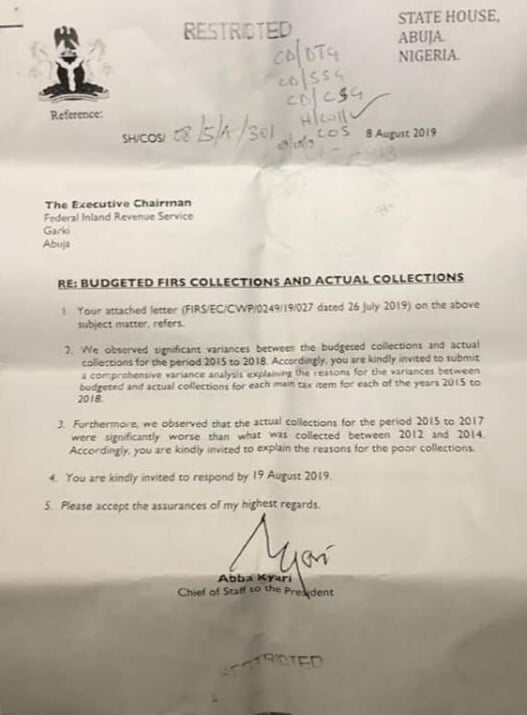 The officials were grilled for allegedly diverting about N6 billion tax funds that should have gone to the Nigerian government.

The affected officials are from the finance and account department of the FIRS.

They include the Director of Finance and Accounts (DFA), Mohammed Auta.

READ ALSO : #BBNaija: Joe has been evicted from the house

Peter Hena, the Coordinating Director, Support Services Group of the FIRS, who was also indicted left Nigeria around the period.

Hena is the most powerful Director in the agency after Fowler.