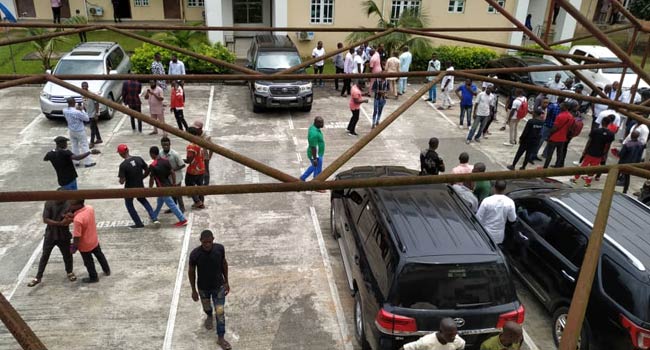 Sporadic gunshots at Bayelsa House of Assembly have disrupted the plenary by the lawmakers.

Some hoodlums seized the disruption to invade premises of assembly complex.

The violence follows an alleged attempt by a faction of the house to impeach the Speaker.

Isenah is expected to resign today following pressure mounted on him by some Peoples Democratic Party (PDP) leaders to quit his position ahead of the November 16th governorship election.

Hints about the Speaker’s resignation made the rounds on Friday, September 27th, with sources claiming that Mr Isenah made the decision as to absolve himself of any blames should the PDP by any chance fail in the forthcoming election.

MY GOOD PEOPLE OF DELTA WHY ISN’T IT EASIER FOR OLOROGUN GREAT OGBORU?