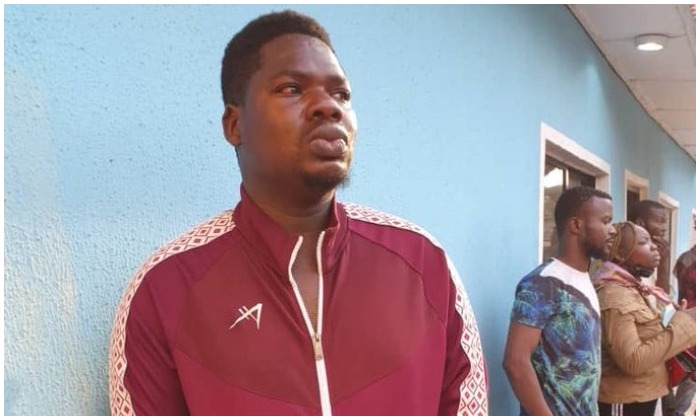 Mr Macaroni at a police facility on Saturday

Debo Adebayo, the popular Nigerian comedian who i also known as Mr Macaroni, and 39 other arrested #OccupyLekki protesters have been granted bail, The PUNCH reports.

Spokesman for the Lagos State Police Command, Muyiwa Adejobi, made this known in a statement on Saturday evening.

He said, “The command has arrested forty (40) suspects at Lekki Toll Gate plaza, Lagos State, on Saturday 13th February, 2021, for conspiracy, conduct likely to cause breach of peace and violation of COVID-19 protocols.

“The suspects had gathered at the Lekki Toll Gate plaza creating tension and behaving in such a manner that could cause breach of public peace without due regard for COVID-19 protocols major of which are use of nose masks and social distancing.

“The command has, however, arraigned the suspects today to the mobile court at Panti, Yaba accordingly but were however granted bail by the court. They will appear in court on the next date of adjournment, 2nd March, 2021, with the certificate of COVID-19 test.

“The command therefore assured the general public that it will always discharge its statutory duties as expected within the ambit of the law, while appealing to Lagosians to be law-abiding and go about their lawful businesses.”

Mr Macaroni and the other protesters were arrested on Saturday for protesting at the Lekki toll gate where he demanded that justice be served to the victims of the October 20 2020 #EndSARS protest allegedly shot at the toll plaza.

Many civil rights organisation including Amnesty International have demanded the release of Mr Macaroni and the other detained protesters.

The Socio-Economic Rights and Accountability Project had also threatened to pursue legal actions if the arrested protesters are not immediately and unconditionally released.

Pasuma Breaks Silence After Being Chased Away By #EndSARS Protesters (Video)