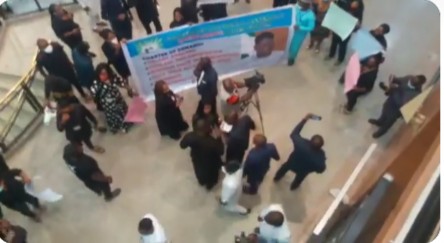 Legislative aides have taken over the National Assembly complex protesting against owed allowances.

The protest started on Tuesday at the upper and lower legislative Chambers.

The aides earlier stationed themselves and blocked the Speaker, Femi Gbajabiamila whom they said has been feigning ignorance of their demands since 2019.

Having done with the Speaker, protesters made deft moves to get the attention of the Senate President, Dr. Ahmad Ibrahim Lawan.

They are yet to be attended to as of the time of this report.