Sarah Ochekpe, the former minister of water resources, was sentenced to six years in prison by a federal high court in Jos, Plateau state capital.

Former President Goodluck Jonathan’s administration had Ochekpe as a minister.

Read Also : Kyari told me to allow him to withdraw N15m from a client account. He will pay me N5m – Lawyer

The Economic and Financial Crimes Commission (EFCC) charged her in 2018 for allegedly receiving N450 million in 2015 from Diezani Alison-Madueke, the former petroleum resources minister.

Raymond Dabo, former acting PDP chairman in Plateau, and Leo Jatau, coordinator of the Goodluck Johnathan campaign in the state, are the two other accused persons.

The defendants were brought up on charges of conspiracy and money laundering.

They were accused of receiving N450 million from Alison-Madueke in order to sway the electorate and the 2015 presidential election outcome.

Investigations by the EFCC revealed that after receiving the funds, Fidelity Bank Plc’s headquarters used its state branches to distribute the election loot to various individuals.

The presiding judge, Musa Kurna, found the accused persons guilty in a judgment handed down on Tuesday.

“The defendants were convicted on count one, bordering on conspiracy to accept cash payment above threshold under the Money Laundering Prohibition Act, 2012 (as amended) and sentenced to three (3) years imprisonment with an option of N2,000,000.00 (Two Million Naira) fine each,” said Wilson Uwujaren, EFCC spokesman, in a statement released after the judgment. 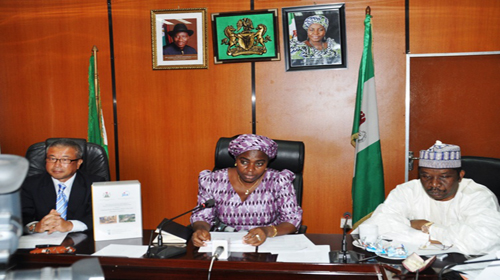 Read Also: Video of witch who landed on high-tension cable in Benin emerges

“On count two, the defendants were found guilty and sentenced to three (3) years in prison, with the possibility of a fine of N2, 000,000 (Two Million Naira) per defendant.
The sentences must be read in order.

“On count three, which involves the retention of funds, the Court discharged and acquitted them.”