The brothers were killed when the assailants invaded and attacked communities bordering Ebonyi and Benue States. 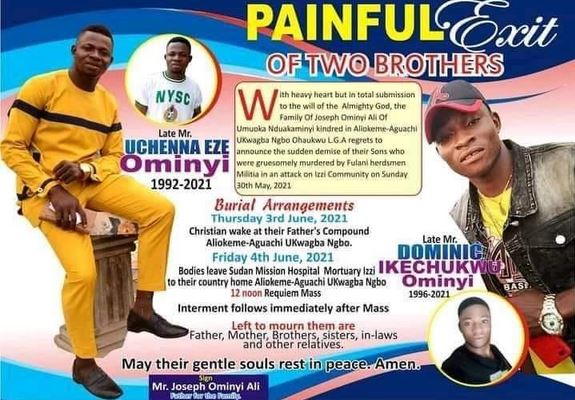 The attack in Ndiobasi and Obakotara communities in the Ado Local Government Area of Benue State, which shares boundary with Ohaukwu, Ebonyi and Izzi LGAs of Ebonyi State, occurred in the early hours of Sunday, May 30.

It was gathered that the brothers were in one Mission Hospital in Izzi where Ikechukwu was said to have undergone a surgery and was being taken care of by Uchenna when the assailants attacked the hospital, killing them alongside other patients.

The Commissioner for Internal Security, Border Peace and Conflicts Resolution, Chief Stanley Okoro-Emegha, who had confirmed the incident stated;

“The Ebonyi State Government has observed with dismay the invasion of Nwori Ndi-Obasi Village in Ado LGA of Benue State in the early hours of today, Sunday, 30th May, 2021. To forestall possible spill over of the attack to the neighbouring villages of Okwofuruike and Ohabuleodo respectively, in Izzi and Ebonyi LGAs, Ebonyi State Government effectively mobilised and dispatched a combined team of security agencies and members of Ebube Agu security outfit to ensure that peace and normalcy is restored in the troubled areas.” 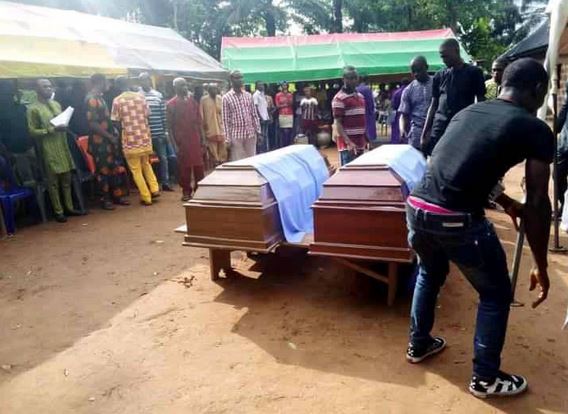 Below is an account of the incident by a member of the community, Moses Sonike Onwe:

‘How it all went down! Comrade Ominyi Uchenna Eze and his younger brother Ikechukwu Eze were of Aguachi Ukwagba Autonomous community, in Ohaukwu LGA Ebonyi State.

Mr Ikechukwu (Uche’s younger brother) was diagnosed of fatty lump between his waist and was referred to a rural medical center at the invaded Izzi Community for a successful surgery, since the general CONSULTANT OF FMC ABAKALIKI, had, without any reasonable doubt, confirmed that Ikechukwu will not walk again with his two legs, if the surgery is carried out at the FMC Abakaliki.

As God willed, the surgery was very successful as at early March, and it has to take time for the heavy wound to be healed.

In all those time, Uche was the one looking after his brother Ikechukwu at the attacked village, pending his recovery at the clinic.

This decision of taking care of his blood brother while receiving treatment, he made against all odds. A very costly sacrifice he was fond of. Not minding what it will deny him. Of course, Uche lost it all this time.

UCHE was a graduate of Food Science and Technology(FST) from Ebonyi State University. Through his studies, Uche was a typical example of a hustling and suffering student. He never forgot where he came from and that fetched him flying colors.

I.k on the other hand, After his secondary school, has chosen to support his brothers through his petty business at Lagos to finish their studies and gain jobs so that he can further his own study. Until they journey beyond, UCHE was a true companion and confidant of all time relationship.

If ever I will trust human being, it was Uche that I find to be Number one. Shit how callousness would cost a precious gift to humanity. It hit me harder again this year. I can’t consume it all.

Simply put, Uche (AKA Admirable) forfeited what he was doing in the city to look after his younger brother Ikechukwu in his hospital bed, but they were slaughtered by Fulani Herdsmen. How may I withstand the shock of not relating again with my nearest man Admirable! Let there be justice for UChe and his brother Ike.” 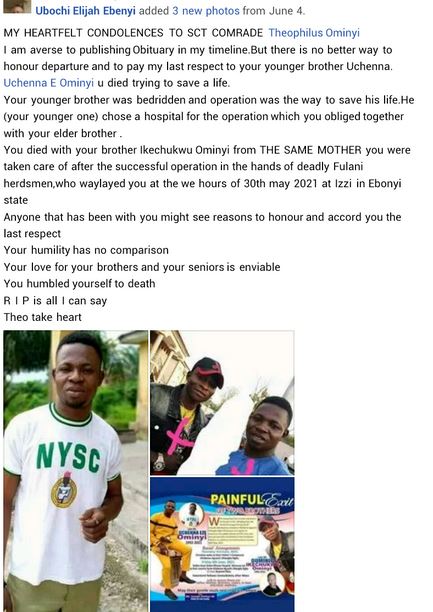 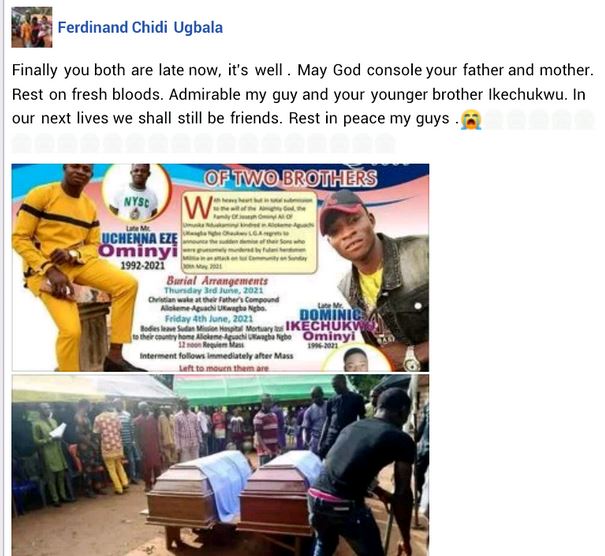 I’m Better Off As Yahoo Boy Than Being Gay – Car Dealer,Chidi Blasts Bobrisky