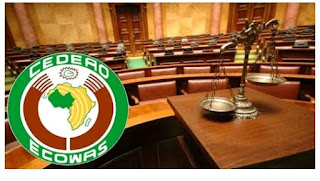 Economic Community of West African States, ECOWAS, Court of Justice, on Monday ordered the Nigerian Government to pay the sum of N88billion as compensation to nine victims of the Nigerian Civil war.
The regional court gave the ruling while ordering all parties in the matter to abide by the terms of the settlement.
Part of the terms of the settlement stated that the Federal Government "undertakes to pay, without delay, compensation in the summer of N50 billion in full and final sum to the victims, their families and communities as contained in Schedule 4(1) to this terms of settlement".
"That FG undetakes to the pay of undertakes to lay a total sum of N38 billion as contained in schedule 4(2) to this terms of settlement for the purposes of carrying out total demining and destruction, rebuilding of public buildings, mine centre activities, construction of class rooms, provision of prosthetics and all other activities enumerated thereunder."
Some victims of the Nigerian Civil War had in 2012, dragged the federal government before the regional court praying for an order for the removal of remnants of war instruments in 11 states of the South East, South South and parts of the North Central.
The victims said the instruments include, life bombs, abandoned unexploded ordnances (AXO), unexploded ordnances (UXO) and the explosive remnant of war (ERW).
They also asked the court to compel the federal government to rehabilitate areas affected by the war and compensate them for the damages caused.

Over 200 Killed As Zamfara Terrorists wreak havoc on communities

PRESS STATEMENT ON THE POOR STATE OF AFFAIRS, INCOMPETENCE, LACK OF CAPACITY AND FRAUDULENT BUDGET...