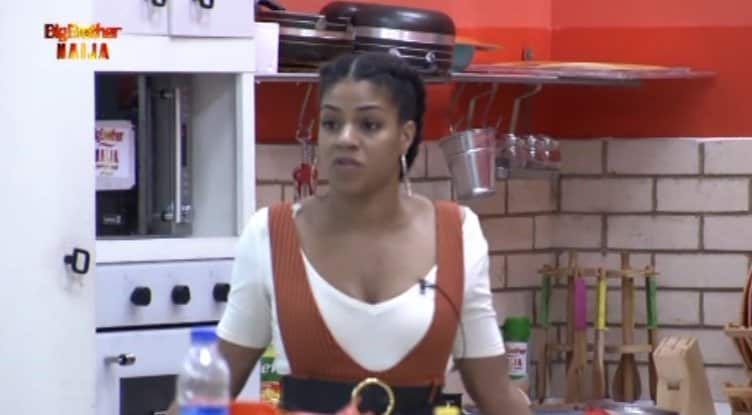 It all happened this morning after Seyi cooked all the spaghetti in the house and made half for his clique, then kept the remaining half in the fridge for other housemates to make whenever they want.

Venita decided to talk about it because according to her, it was unfair that the house has been divided, with everybody with their team and gang.

A little talk between Mercy, Enkay and Venita about food this morning gingered the latter to air her opinion. Since losing their Wager, the Pepper Dem gang have shown us how much they like food.

With the way she dashed into the room, we thought she was going to pounce on Seyi for that. Instead, she was seen ranting about Tacha, Seyi and Mercy being the ones who frequent the kitchen the most. Seated there hearing her, Seyi did not budge on his seat. But that was him. If he could stomach being called out like that, not Tacha.

She must have heard Venita as she passed by, so she responded as e dey hot, ‘If you’re going to be talking about people like that, please count me out’, she said, ‘Stop mentioning my name.’ She concluded. As if that statement meant silence, Venita abruptly stopped talking and went back to the garden.

Still on the food matter, Mercy feels that the House should have a meeting about the cooking routine. She said cooking alone should no longer be allowed if they really wanted to manage with the little they have. In her response to Diane who wanted to cook, she said that must wait till they call for another meeting. But Esther would have none of that. In her gist with Diane in the dressing room, she said that nobody could stop her from cooking.

Since coming into the House, Venita seems determined to say to anyone who cares to listen that she can’t be taken for a ride. When Mercy told her and Enkay that Seyi kept soaked spaghetti in the kitchen, she flared up and stood up immediately. It seems she has had enough of food wastage, not even when there isn’t much to go round.

Check out the video below:

Just In : EFCC Breaks Into BBNaija’s Star House, See Why