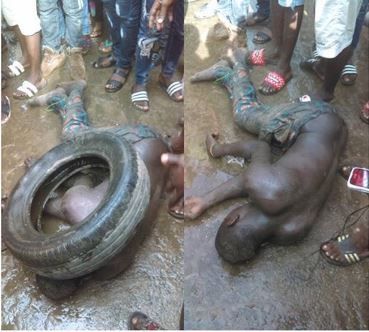 A member of a 3-man gang that specializes in stealing babies, met his Waterloo, today, at Showimo bus stop, Ojo, Lagos State.

It was gathered that the suspect and his gang members attempted to snatch a baby from a woman, who they nearly strangled to death in the process.

However, passersby took notice of what was happening and intervened, nabbing one, while the two others escaped.

The suspect was subsequently subjected to jungle justice and was only saved from being set ablaze, by the timely intervention of the police.

Why We Always Shot Suspected Kidnappers In Their Genitals- Nigerian Police

Why We Always Shot Suspected Kidnappers In Their Genitals- Nigerian Police