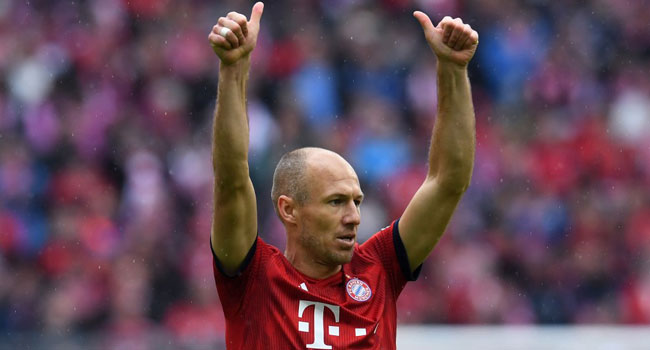 Arjen Robben, a legend of Dutch football, announced his retirement from his youth club FC Groningen on Thursday, after a two-decade career.

Arjen Robben, regarded as one of the best wingers of his time, returned to FC Groningen last year following spells with Chelsea, Real Madrid, and Bayern Munich in later years.

“It was a difficult decision,” the 37-year-old stated of his decision, which FC Groningen also confirmed.

“Everyone at FC Groningen hoped and wished that Robben would stay for another season, but after considerable thought, he has decided to retire,” the team said in a statement.

Arjen Robben, who had a lethal left foot and was one of the fastest and most skilled dribblers in his heyday, scored more than 200 goals for his club and 37 for the Netherlands, the last of which came against Sweden in Amsterdam in October 2017.

Two years later, he made his first abroad move to Chelsea, where he played a key role in helping the west London team win the English Premier League in 2005-06.

Robben joined Real Madrid for a rumoured fee of roughly 35 million euros in 2007, before joining Bayern Munich in 2009, where he was instrumental in the club’s success.

The bald Dutchman last scored in the Bundesliga for Bayern in May 2019, with 99 goals in 201 games.

Robben announced his retirement a month later, but was enticed back to play for FC Groningen last year.

Robben led the Netherlands to a World Cup final in South Africa in 2010 and a third-place finish in the 2014 World Cup in Brazil as a member of the national team.

However, injury has dogged the winger throughout his career.

“When I reflect on the previous season, I have to admit that the number of match minutes was disappointing,” Robben stated on Thursday.

“The football heart wants to keep going…,” Robben stated, “but the decision to retire is reasonable and realistic.”