Ejes Gist Newspaper reports that the Bola Tinubu, the party’s nominee for president in 2023, Presidential Campaign Council (PCC) has been formed by the All Progressives Congress (APC).

At a convention in Abuja in June, the party’s co-founder and former Lagos helmsman secured the presidential Candidacy of the party.

The PCC Secretary, federal legislator James Faleke, announced the list of the council’s 400 members on Friday.

Osinbanjo not on the PCC

Vice President Yemi Osinbajo, who ran against Tinubu, is not on the list. When the APC nominee was governor, the vice president served as commissioner for justice.

Rotimi Amaechi, a former transportation minister and first-place finisher in the primary election, was appointed special adviser on infrastructure.

The PCC is presided by by President Muhammadu Buhari, with Tinubu serving as the second deputy chairman and APC National Chairman as the third.

Hundreds of current and former Governors, Senators, members of the House of Representatives, and Ministers also made the list.

The remaining individuals include politicians, party elders (Campaign Patrons) and chieftains in States, leaders of women and young people, and actors.

The Coordinator of each State will be an APC Governor (or contender for governor). Some of them will also serve as Zonal Coordinators or Special Advisers in addition to their roles.

See Also: What will happen if Christians vote for Tinubu in 2023 – APC Chieftain

Trade and economics is represented by Gbemisola Saraki, labour is by Bobboi Kagama, stakeholder relations by Nuhu Ribadu, policy and research is by Musa Babayo, and diaspora is by Ade Omole. 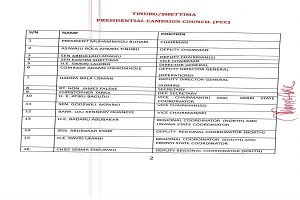 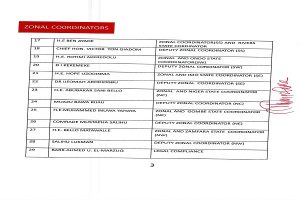 That is the latest NewsOnline Today on APC presidential campaign council